skip to main | skip to sidebar

Further on the College Scam

There are many reasons why someone being tens of thousands of dollars in debt for a degree in Women's Studies is symptomatic of the problems with higher education, or indeed all of education, in the United States. This goes beyond the problem of trying to steal the cause by emulating the effect and is actually a problem with education itself.

On the other hand, if education is supposed to train one for a career, then again there is no reason why a person should go tens of thousands of dollars into debt for a Women’s Studies degree. If the purpose is to train for a career, then there is something horribly wrong with the educational priorities demonstrated in the United States today. Many people talk about the need for STEM, but the discussion on campus is typically about strengthening the position of the multi-cultural departments.

Even on a typical campus not overrun by multi-culturalism, when the curriculum is being developed each department lobbies to increase their share of the core requirements. It takes a firm hand by the college administration to hold down the core requirements to that they do not overwhelm the course load required by the student of the college. Each of these additions to the required courses hearkens back to the purpose of college being enlightenment instead of applicable to a career. Assuming the purpose is to apply to a career, the enlightenment purpose tends to seep back in over time, increasing the cost.

Assuming again that the purpose is to train for a career, the many people taking the enlightenment and enrichment courses are competing for class space and allocated funds, taking funds away from career oriented courses of study and raising the price for those who would directly benefit from being in college. Both the philosophy major and the engineering major have to take Freshman English, and there are only so many seats in the class. That raises the price of college for the engineering major who is a perfect example of the second potential purpose of education.

Then, as John Taylor Gatto has pointed out, there is a third purpose to education as it is set up today, also conflicting. It is to train people to accept the governmental system that exists today and to make obedient workers. That has potential to overlap with the purpose of training for a career but conflicts grossly with the purpose of enlightenment.

Combine all of these with the progressive effort to capture the cause by emulating the effect, a cargo-cult mentality with what makes one successful, and the cost of education can only climb absurdly so that even those who do manage to cut through the nonsense and are sensible enough to major in something that can be applied, even they can no longer afford college. The cargo-cult mentality, hoping to make everyone successful, will result in nobody being successful.
Posted by Ayn R. Key at 8:34 PM No comments: 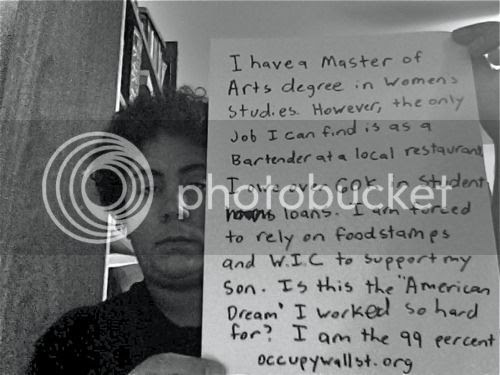 This image has become popular recently among conservatives, and while the authenticity is not verified it is sufficiently likely that one can assume that if this exact picture is not real then there are others in the described situation. While there are several other problems in the 99% statement being held, the most glaring one is the problem of student debt and underemployment.

Other libertarian writers have described just how bad of an investment college generally is. This picture sums up the case as well. Unless a person majors in a field that is likely to have jobs available, a college education can indeed be a losing proposition.

Popular advice is to major in "STEM", Science, Technology, Engineering, and Mathematics. The problem is only three of those are actually good advice - mathematics even can be considered too general a field, too unspecialized, to be easily applicable to the job market.

On the other hand, there are people who major in fields that have no immediately recognizable applications to such a degree that even the generalized field of mathematics seems like a good alternative. The woman in the picture apparently has a Masters Degree in Women’s Studies. Before going into debt the question should have been asked what was the intended career path of someone with that degree.

Given the soaring costs of college, and the reduced payout even in immediately applicable degrees, it would also be advisable to consider technical schools and trade schools. Many community colleges offer courses in auto repair, plumbing, sheet metal, etc. The point is that each of these, much like STEM, are jobs that can be applied quickly and easily.

The age of liberal arts majors are waning. There was a time when college was a luxury only the rich could afford, or that the very intelligent could attain with scholarships. Confusing cause and effect, it was determined that since the rich went to college, then going to college would make people wealthy, and therefore more and more people should be encouraged to go to college. But instead of producing an entire society of those who were able to afford the status symbol of college, the value of the degree has been weakened while the cost has gone up.

One cannot impose the effects of a better life in order to create the substance. The substance is what creates the effects. College once was, and is becoming again, an effect or feature of wealth, and no longer a guarantee of wealth. And colleges that emphasize useless majors over anything related to science are a symptom of the decline.
Posted by Ayn R. Key at 10:25 PM 1 comment:

Yes, some people are bigots and would gladly indulge in their bigotry without the current civil rights legislation, but that does not equal a return to the "days of Jim Crow" because the most salient feature of Jim Crow is that it was law. It was passed by the various city, county, and state governments and enforced by the police. Those who violated Jim Crow laws were subject to legal sanctions.

It is important to remember, laws are passed to either to prevent someone from doing what they are already doing, or to compel someone to do what they are not doing. That statement is without value judgment, it is fact. But that implies that there were people willingly not complying with any racist culture that gave rise to the passing of the Jim Crow laws.

Some will object at this point by pointing out that the fact that the laws passed is proof of the racist culture and that the people would not have served minorities anyway. Even if the majority of the culture was racist, that does not mean all were. Laws are passed to stop people from doing what they are doing, even if that means ignoring any racist culture surrounding those allegedly minority businesses that operated without regards to race.

Also, assuming the dominant culture is an example of the Democratic Fallacy, that the actions of a government in a representative voting system automatically represent the will of the people who vote. It happens many times that there is a severe disconnect between the electorate and the elected, with countless examples available.

Still, there are those who will never be satisfied with knowing that Jim Crow was law, and try to insist that it was culture until another law superseded it. If it was cultural, then there exist the problem of explaining away the Montgomery Bus Strike, in which a majority of the people were in favor of a peaceful resolution of the strike. The strike only went on as long as it did because the government found ways to fight against its own people, the people that it allegedly represents and follows the will of.

The problem with civil rights legislation is that it is most often the case of one law combating another law. It is a case of conflicting levels of government passing laws to combat what the other levels of government are mandating or forbidding. That makes a poor case for arguing the necessity of new legislation, when the real case is repealing the old legislation that is creating the problem in the first place.
Posted by Ayn R. Key at 3:00 PM No comments:

The name is a symbol because this blog is not about me but only about the ideas I present - those of the Austrian and Objectivist schools of libertarian thought.